Can Katy Perry save Bitcoin, Ethereum and Cryptos? 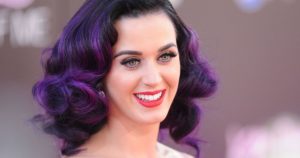 Operators are increasingly tense in the cryptocurrency market. The courtscorrect again today, on fears of regulation at the international level. After South Korea and China, it was more recentlyTheresa May and Emmanuel Macron turn to assert their desire to regulate this opaque market ...

May and Macron want to regulate 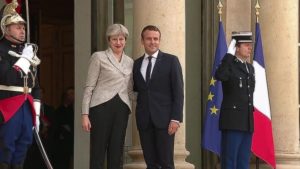 Speaking at the Davos Economic Forum, Emmanuel Macron said he was in favor of the IMF having a mandate to monitor the entire financial system, “whose whole areas are beyond regulation”. The French president mentioned Bitcoin, crypto-currencies, or shadow banking, “the most aggressive on the financial markets”, those who can “create financial crises or deregulate systems”. According to him, it would be up to the International Monetary Fund to control these opaque markets.

In the same vein, UK Prime Minister Theresa May has ruled that the issue of Bitcoin and cryptocurrencies needs to be studied very seriously at the international level. May believes that technology companies should focus on the issue of social responsibility. Particularly in the areas of terrorism and child pornography. The British leader expresses her fears about the possible use of digital currencies for criminal purposes …

South Korea and China had already hardened their tone

The ‘cryptos' had already stalled a few days ago, on fears mainly linked to South Korea, and to a lesser extent to China. South Korea would consider massive imposition of Bitcoin and ‘cryptos' trading platforms, which could be retroactive. Holders of ‘cryptos' will have to link their digital currency portfolios to traditional bank accounts. Finally, the local financial services regulatory committee is ready to close all cryptos trading platforms that do not respect the rules …

Katy Perry, a crypto by finger

Faced with the threats of regulators, digital currencies can count on various support from celebrities. 50 Cent rejoiced there is little ‘good luck' on Bitcoin. The rapper has multiplied his revenue by accepting payments in BTC for the sale of his album ‘Animal Ambition' released in 2014.

Yesterday, it's the American singer who surprised in turn, posting on Instagram a very original manicure. 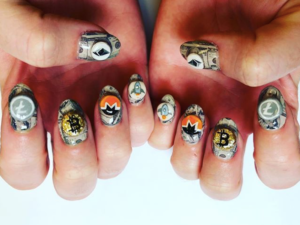 Each nail of the star has been decorated with symbols in relief in the colors of a crypto-motto:

Bitcoin for adults, Ether for thumbs, Litecoin for indexes, Monero for rings and Stellar for the auriculars. From there to assume that the singer has invested on virtual currencies, there is only one step. Given the ‘weight' of the star on social networks. Not surprising that the photo in question has already been ‘liked' more than 140,000 times. So this is a very good advertisement for ‘cryptos', especially Stellar and Monero which are currently unknown to the general public.

Katy Perry had already expressed interest in cryptocurrencies. In November, the singer posted a picture of her with legendary investor Warren Buffett. The commentary to the photograph said: “Nothing special, I just ask Warren Buffett his opinion on cryptocurrencies”. Katy Perry did not specify Buffett's answer. But it can be assumed that the Omaha oracle did not praise the merits of the digital currencies.