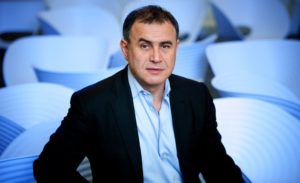 According to “the man who predicted the 2008 crisis,” Nouriel Roubini, in an interview with Bloomberg TV, bitcoin would be the “biggest bubble in history,” indicating that it would be even more severe than the tulip crisis of the XVII century. After the collapse of bitcoin in recent weeks, how to analyze this statement?

In the past it happened already ?

Michel Ruimy: About 380 years ago. The tulip bulb Semper Augustus became the symbol of one of the most spectacular speculative bubbles in history. In February 1637, its price reached 10,000 florins. The equivalent of 10 times the annual salary of a skilled artisan, 5 hectares of land of the time or that of a beautiful house on the edge of a canal posh Amsterdam. This was the culmination of a craze as brutal as it was irrational. Which led to the ruin of speculators, who dreamed themselves as savvy investors. Subsequently, this “tulip crisis” was associated with a disproportionate increase. Then the collapse of tulip onion prices in the Netherlands in the middle of the seventeenth century.

Today what is happening?

Today, some people see, with the evolution of bitcoin, a similarity with this “tulipomania”. Indeed, while it was worth a few cents to its creation, in 2009, its price peaked at nearly 20 000 dollars in mid-December to reach recently less than 9 000 dollars! And they evoke more and more the possibility of a crash.

For all that, is bitcoin the “tulip” of the digital age? Is the current bubble more important than that of tulips? Or will bitcoin rise again? The answers to these questions are complex.

First of all, financially, if the price of bitcoin collapses, there would be no macroeconomic crisis, as the state, in a traditional crash, intervenes to support the economic activity. But here, none of this because this asset is not issued and managed by any authority. It's a noticeable difference! The most tangible risk – that of the collapse of the value of electronic money portfolios – is run by the owners of bitcoins. However, this currency sometimes plays, especially in China, the “safe haven” function.

In addition, the estimated capitalization of the various cryptocurrencies would be close to $ 300 billion, very little compared to the balance sheets of central banks.

So why all these torments?

Because central banks are concerned about a possible risk of losing control of payments (risks of piracy, fraud …). At the same time their ability to monitor global trade. That is why, in this context, some central banks support regulatory approaches before it is too late. For the moment, the management of the ICO (Initial Coin Offering) seems more to their prerogatives and be within their reach. China and South Korea have decided to ban them.

Nouriel Roubini goes on to say that the fundamental value of bitcoin is “0”. Is it a provocation or a reality?
We must distinguish between the notions of “price” and “value”.

The price is determined by the market as a result of the confrontation of supply and demand. This is the case of bitcoin. In other words, it depends on the number of bitcoins in circulation. Currently, there are just under 17 million in circulation, while the maximum is 21 million. The undeniable volatility of its price is only a reflection of the growth in the number of users (or speculators). The higher the demand for the supply, the higher the price.

As for the concept of “value”, several theorists have worked on it. In a simplistic view. I will simply say that it can be estimated by an economic calculation based on the conditions and production costs. Since bitcoin has no materiality, its intrinsic value would be “0”.

However, the “mining” of transactions and transaction fees levied by the platforms can be assimilated to production costs by the buyer. It could then very well give it a certain value, certainly evolutionary. As the costs of production of a raw material such as gold, silver or diamond can fluctuate according to the difficulty of their extraction.